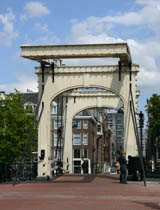 The famous skinny bridge across the river Amstel and opposite of the Carré theatre, is an Old Dutch design wooden bridge known as a double-swipe (balanced) bridge. Tradition relates that the bridge was named after the sisters Mager, who were supposed to live on opposite sides of the river. They are said to have had the wooden bridge built to make it easier to visit one another. However it appears more likely, that the original bridge acquired the name from being so narrow (mager means skinny in Dutch), that it was hard for two pedestrians to pass one along another.

You can visit the Magere Brug (Skinny Bridge) with the
Amsterdam Day Canal Cruise, 4 euro discount 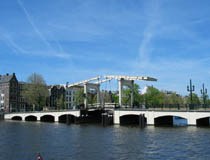 As traffic along the river Amstel increased, a wider bridge replaced the narrow one in 1871. Skinny Bridge is far not skinny anymore, but one of the most beautiful bridges of Amsterdam. At night many lights illuminate the bridge, then it becomes a very romantic place, popular with lovers and photographers.

The bridge is situated on Amstel, between Keizersgracht and Prinsengracht. See pictures of Amsterdam bridges.

Magere Brug (Skinny Bridge) in Amsterdam on the map