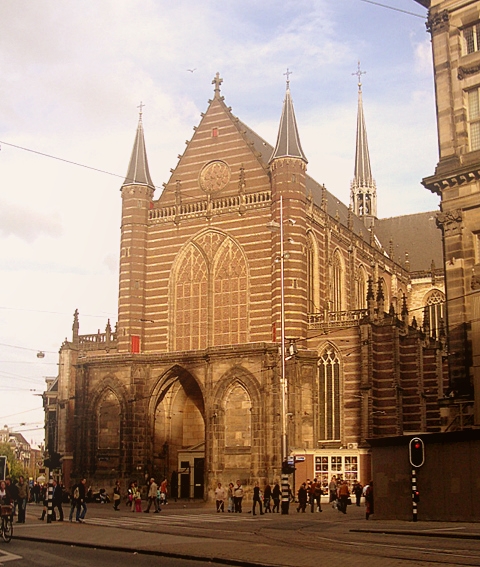 Adjacent to the Royal Palace is Amsterdam Nieuwe Kerk, a church of the highest order. Akin to the Gothic churches of France, it was built circa 1400 due to the shortage of churches in the city and over the years, many changes have been made. The New Church remarkably managed to escape major damage in 1421 and 1452, the two great fires of Amsterdam, although two centuries later it was reduced to ashes when plumbers accidentally started a fire. The church however has been faithfully restored to its former glory, exhibiting the original early Renaissance style features throughout even though it remains tower-less.


Today, the Nieuwe Kerk in Amsterdam is the most important church in the Netherlands. Since 1814, Dutch monarchs have been inaugurated here, including the reigning King Willem - Alexander, Queen Mother Beatrix, her grandmother Queen Wilhelmina and Queen Wilhelmina’s mother Queen Juliana. On April 30, 2013, at 2.30 pm during the special session of the Sates -General of the Dutch parliament, His Majesty King of the Netherlands Willem-Alexander was inaugurated in the Amsterdam Nieuwe Kerk. In 2002 he also married Princess Máxima born in Argentina, today the Queen consort, in this beautiful church. In between coronations and weddings, the Amsterdam New Church is the venue for the temporary exhibitions on art and history.

Inside, admire the elaborate altar, arched nave, great pipe organ, sepulchral monuments with the tomb of much admired Dutch admiral Michiel de Ruyter (1607 - 1676), who died during the sea battle with the French at Messina, as well as church's stained-glass windows. But if you want to take pictures, please ask first for permission.

Nieuwe Kerk in Amsterdam on the map