The Old Church is one of the oldest religious monuments of Amsterdam, with history dating back to early Middle-Ages. The church has been many times rebuilt and transformed. 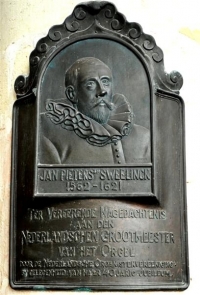 Originally this built in the 13th Century and dedicated to St. Nicolas, patron of sailors church, had been a wooden construction. At the end of 13th C. the decision was taken to build a stone church. The Oude Kerk had at first the form of a Roman hall church, the first church of its kind in the Netherlands. In 1306, the church has been consecrated by the Catholic bishop of Utrecht Guy van Avesnes van Henegouwen, whose sculpted grave you may still see at the Dome in Utrecht.
In 1340, the Oude Kerk had been enlarged to a remarkably sizeable structure for a city, which had at the time three to four thousands inhabitants. Wonderfully, the big fires of Amsterdam in 1421 and 1452, which ruined then mostly built of wood town, did not damage the Oude Kerk.
In the 14th and 15th Centuries, the church has been the Amsterdam parochial church, and because the city grew rapidly, the Oude Kerk has been several time rebuilt and enlarged. In 1565 the Oude Kerk received the bell tower and since then its architecture did not change much. 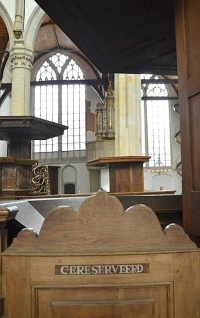 The Oude Kerk interior has been thoroughly demolished during the iconoclast events in August of 1566, when Amsterdam population revolted against the excesses of the Catholic Church and the power of pope in Rome. The mob demolished the rich fixtures of the church, resented by the Dutch population as immoral. The traces of vandalism remain visible until today. Only the paintings on the ceiling were not damaged, as they were beyond reach for the protesters. The city guards had to use firearms, to restore order.

During so called Alteration of 1578, when the city of Amsterdam has chosen the side of the Calvinist Protestantism, the Oude Kerk became Reformed Protestant church, and as such remains until today.

Famous Dutch painter Rembrandt van Rijn, who during the peak of his career had his family lived nearby – his house is today the Rembrandt House Museum, attended services at the Oude Kerk and had his children baptized here. His wife, Saskia van Uylenburgh has been buried in the Oude Kerk in 1642, but as Rembrandt had to sell Saskia’s grave later, when he died in 1669, he was buried in poor people an unmarked grave in Westerkerk.

The Grand organ of the Oude Kerk

While in the 16th and 17th Centuries Dutch protestants felt that the music was inappropriate in a church and not often permission to build an organ was given, the view started to change at the end of the 17th Century. And while during the Reformation the Oude Kerk had only a small organ, in 1724 the construction of the big baroque grand organ started. Learn more about the famous Oude Kerk organ.