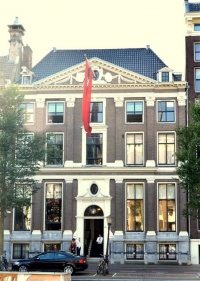 Amsterdam 17th century canal ring area is one of the marvels of the world’s architecture. Half circular, man built canals with tens of bridges, water locks, new city defence walls and thousands of individual building parcels were planned in 1612, when the old Mediaeval city grew in such a rapid pace, that it required a swift urban solution. Within fifty years, the whole new areas of Amsterdam with new houses, bridges, churches and gardens were built along the newly built canals. The Canal House museum – Dutch: Het Grachtenhuis, through an interesting multimedia exhibition, documents the history of this unique urban development.

Visit to this museum is for free with I Amsterdam City Card. You also get public transport, museums and attractions entry and canal cruise. It is highly recommended for tourists.

The museum is located in 17th C. patrician house overlooking the Herengracht canal. It’s width certifies to its splendour - 16 meters or 52 feet, which at the time meant almost extravagance, because of the cost of the building terrain. Most of the townhouses were built tall and narrow, on a small but deep parcel. The house interiors, with its beautiful wall paintings and authentic floors, were partly preserved, so you may see today how centuries ago these houses looked like inside.

Designed for the rich merchant Karel Gerards by then famous architect, Phillips Vingboons, who lived in the years 1607-1678, the house has been completed in 1667. It was later owned by several important bankers and business people, therefore its walls must have witnessed many important historical transactions. For example - it is here, that Dutch loans given by the Amsterdam banker Jan Willink to the government of the United States in the 18th C., were signed. The Netherlands has been at that time one of the few world’s republics (Republic of Venice was another) and effectively supported United States during its War of Independence with the Kingdom of Great Britain.

The exhibit in this house overlooking the Herengracht canal, was an initiative of one man - Dutch industrialist, now in his 60-ties, who in 2009 purchased the residence and transformed into the museum. Today, Het Grachtenhuis is run by a foundation. 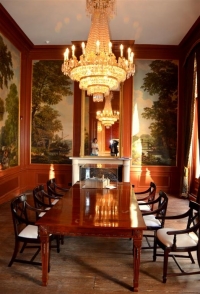 The Canal House show explains the situation in Amsterdam before the construction of the 17th C. canal ring area called in Dutch ‘grachtengordel’ – Amsterdam Belt Area, and tells the story of its construction. Digging of the city three main canals – Herengracht, Keizersgracht and Prinsengracht, creation of tens of smaller cross canals, partition of building lots, as well as construction of the new fast growing city, was not easy on wet and muddy land of the area. Today, the truly unique, registered by the UNESCO as the World Heritage monument, Amsterdam Belt Area may be still admired, almost unchanged.

The visit to Het Grachtenhuis, which takes less than an hour, gives you another point of view on the Amsterdam history. Wonderful miniature model of the canal house, very much in the tradition of the Dutch Golden Age dolls house but enriched with multimedia wonders, and the big urban model of the canal ring area, are the highlights of the show. Seeing it makes you better understand not only the history of the Amsterdam canal area, but also the social make up of the city, its traditions and its spirit.

A small modern museum located in an exquisite, old canal house. While its multi-media presentation has been made on a popular and sometimes simplified level, this small exhibit is essential to all visitors interested in Amsterdam history.
Two nearby museums named after the owners of the historical patrician houses – Museum Van Loon and Museum Willet-Holthuysen, both within 15 minutes walking distance, offer you the possibility to see the fully furnished interrior of the Amsterdam canal house.

How to get to Amsterdam Canal House Museum