This museum on rails has been established in 1975, by a group of tram fanatics. They restored old electric trams from the beginning of the 20th C. and made them run on a separate tram line from Amsterdam to Amstelveen. Today The Electric Tram Line Museum has in its collection historic trains from different cities - Amsterdam, Rotterdam, Den Haag, Groningen, Utrecht, Vienna, Graz and Prague. Most of them are 70 years old, their original colors and all historical signs have been preserved. The trams are maintained in working condition to ride each Sunday on a 7 km. long tramway from Amsterdam to Bovenkerk/Amstelveen. 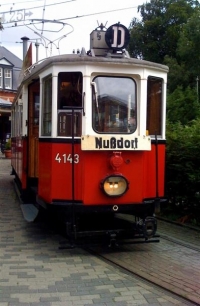 The historic tram line has on its way three stops in Amsterdamse Bos, where you may step out, walk in the park, have a meal in one of the restaurants, to return later also by tram to Amsterdam.

A real fun, especially for kids. The ride feels like taking a time vehicle hundred years back, into the beginnings of public transport in Europe.

Only on Sundays. From Eastern Sunday in April until last Sunday in October the tram museum is open from  11 am till 5:30 pm.

Check the Museum website for additional rides with the participation of Saint Nicholas before Christmas. 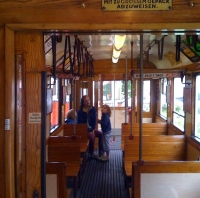 Walking: from the Concertgebouw along De Lairessestraat - a busy street for 15 minutes, continue on Cornelis Krusemanstraat; at the end of the street, behind the roundabout, you will see the old brick building of Haarlemmermeerstation - the initial station of the Museum Tram.
By public transport: tram line 16; by bus: line 145 (stop Krusemanstraat).
By car: driving from the ring A10, take an exit S108 (Amstelveen/VU) and drive direction the city centre. On a first big square (Stadionplein) take left on the traffic lights along Amstelveenseweg. Drive for about one mile till you reach a roundabout. The old building on the left is Haarlemmermeerstation. Park your car in any of the streets (free on Sundays).

Electric Tram Line Museum in Amsterdam on the map