Amsterdam Forest, because this is the name in English of the big park just outside Amsterdam, is a marvelous place where you may relax walking, taking a bicycle ride, making a picnic, rowing on a canoe or in winter when it snows, skiing down the slope. 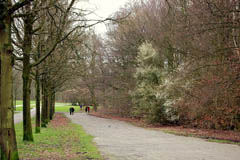 Amsterdamse Bos is a large park – it is comparable in its size to Bois de Boulogne in Paris, the difference being that it is totally artificially created, on unused turf lands and wetlands just out of the city. As some of the trees have now seventy years, Amsterdamse Bos is today a real forest, but because it has been planned and arranged, it has many facilities created for sports and leisure. It has among others, several large water areas – a long artificial rowing lake, several other lakes, a number of swimming pools, some of them small - ideal for children and multiple sports facilities. The big attraction is De Heuvel (The Hill) - an artificial mountain with one slope let free for all kinds of winter sports.

Amsterdamse Bos has been designed under the influence of the English landscape park – seemingly free, giving its visitor open view on landscape with a wide perspective of view. It has been constructed south-west of Amsterdam, between Amsterdam and Amstelveen, on the especially created polder 13 feet (4 meters) below the sea level. First part of the park has been opened in 1937, the whole initial plan completed in 1964. The park has been constantly improved throughout its existence. 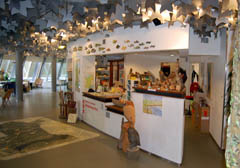 You may enter the park from several places, but when you go through the main entry, you will see two big bunker like constructions on both sides of the road. Do not get scared – the right one is a nice, big café with a huge terrace, great to sit in the summer. The left building is a visitors centre, with a reception and a souvenirs shop and a small permanent exhibit about the park history (in Dutch, free entry; open everyday 12 a.m. – 5 p.m.).
You will have a big choice of activities, but in Amsterdamse Bos which is a combination of the wild natural area (a new part called Schinkelbos), traditional park and many permanent sports facilities, this choice is wider than in any other park.

You may walk in the Bos as in any other park, also on grass, except for the bushes areas. For the joggers the park has a special trim route with the 14 simple sports facilities as fences, horizontal bars, rings, balance beams for different exercises. 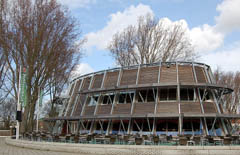 Amsterdamse Bos is a perfect picnic area. While an open fire is forbidden, a barbecue grill is allowed, provided it is placed on the stand higher that 50cm and not in the direct contact with the area of trees or bushes (at least 5 meters distance). You may not enter the park lanes with your car, but in exceptional situations (like having a lot of picnic equipment to transport for a big party), you may ask for a special permission at the visitors centre. Without this permit, you should stay on one of the main roads leading through the park (free parking on many locations).

While it is forbidden to camp in the forest, located at the Bosrandweg there are many Amsterdam camping places. Another cheaper and social option are hostels in Amsterdam. Biking in Bos is possible. There is a bicycle rental, just after you have crossed the tram rails at the main entry to the Bos, in the small white kiosk on your right. It is open only in summer. Many small roads in the Bos have a hard surface – they are perfect for biking. You my also train your mountain bike skills on small terrain roads.

Two riding schools (Dutch: Manege) are located in the park, on both ends of Nieuw Kalfjeslaan: Manege Manege Nieuw Amstelland (telephone: 020 6432468; website:http://www.nieuwamstelland.nl) and De Amsterdamse Manege (telephone: 020 6431342; website:http://www.deamsterdamsemanege.nl). At both stables, you may hire a horse for a pleasure riding in the park, under the condition that you are a good rider.

You may spend a great day rowing along the canals amid the forests, or on an open space on one of the lakes. To rent a canoe or a pedal boat you should go to the Grote Vijver lake. Please note that painted in different colors poles at the water, indicate your way through the canals in the Bos. 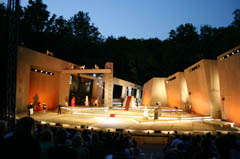 In summer of 1985, a group of actors and theater makers created an open-air theater in Amsterdamse Bos. The shows are held mainly in the summer, and they are very popular. There is nothing better for a theater lover than to see Shakespeare’s A Midsummer Night’s Dream in a theater in the middle of the forest, with hundreds of other spectators. We advise to take with you a blanket, a bottle of wine and a bite of food – Shakespeare’s play may be long especially when the full text is staged, while it might be cold at night. (1700 seats, tickets € 5,- on Tuesday and Wednesday; € 10,- on other days; more information from 6 p.m. on the day of the show - telephone:020 643 32 86; for the show titles, dates and the location - check their website: www.bostheater.nl)

There is a special area in Amsterdamse Bos set apart for the sunbathing without any clothes on. It has been located on the covered by tree grass land called Zonneweide located not far from De Amstelveense Poel lake.

There are two farms in the park: Boerderij Meerzicht is today more a popular pancake restaurant serving also soup and sandwiches, but it keeps some animals for the fun of children visitors. Drive along the rowing lake Bosbaan and park your car behind it. Walk through the park following the signs. (open March - October; 10 a.m. - 7 p.m. each day except Monday; in winter open only during the weekend; play ground for children, telephone:020 679 27 44; website: www.boerderijmeerzicht.nl).

Geitenboerderij "De Ridammerhoeve" is an authentic cheese farm. It is located in the middle of the Bos. You may visit it, drink milk, eat a sandwich.(telephone: 020 645 50 34; free entry, closed on Tuesdays and in winter on Mondays; website: www.geitenboerderij.nl).

De Electrische Museumtramlijn – the old electric tram line between Harlemmermeestation in Amsterdam and Amstelveen/Bovenkerk is serviced by the historical trams. Great atmosphere, good attraction for children. The tram has several stops – one is at the main entry to the Bos. (from the Ist Eastern Day until the end of October, only on Sundays.

If you like to observe low flying jumbo jets, take a walk from the visitors centre along the wide alley into the park. Each minute you will see low flying huge planes from the nearby Amsterdam Schiphol airport, one of the biggest in Europe. They do not make much noise as they have to fly very slowly and the view is great.

It is typical of the Dutch, that even in the moments of leisure they tend not to forget about those who had suffered. If you go along the left bank of the rowing lake (Bosbaan) or drive you car up to the first small car park also on the same side, you will be able to see there a small but impressive Dachaumonument – the Monument of the Dachau Concentration Camp memorizing victims of the German death camps during the World War II. The monument lists names of the places where millions of people were deported by the Nazis and murdered.

Each year a number of special events is organized in the Bos. For more information, please inquire at the Visitors Center – Bezoekerscentrum “De Mol” telephone:020 545 61 00, at the main entry left building, Bosbaanweg 5, Amstelveen; open everyday 12 a.m. – 5 p.m.).
Do not cross fences around the Schinkelbos. Scottish Highlander cows, which are fed there, are not aggressive, but respect their peace.

How to get to Amsterdamse Bos

By bicycle: De Amsterdamse Bos is less than 4km from Amsterdam. There are convenient bicycle lanes created on both sides of the road. You should go there via Amstelveenseweg, in the southwest of the city and on the first big crossing in Amstelveen turn right to the park.
By bus: from the Central Station lines 170 and 172, from the RAI station – lines 66 and 199.
By car: Driving from Amsterdam take southwest to the Amstelveenseweg. Drive away from the city. From the ring exit the ring A10 at S103 and turn left into the Amstelveenseweg. After about 2 miles, Amstelveenseweg enters the municipality of Amstelveen – then turn right to the park (third crossing from the ring A10). There will be a small blue sign marking the turn. You may park your car on one of the 30 car parks. Parking in the Bos is free.

Amsterdamse Bos Park in Amsterdam on the map