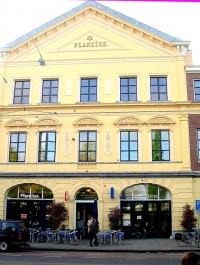 In 1980 Dutch people of different political streams who fought against the Nazi occupation during the WWII, worked together on the historical exhibition about their struggle called 1933-19nu. 1933 was the year when Hitler took power in Germany, so translating into English the name of the exhibit would be 1933-19now. There was a growing conviction that a special attention has to be brought to this period of Dutch history and therefore Het Verzetsmuseum Amsterdam (The Resistance Museum Amsterdam) has been established in 1984.

Permanent exhibit of the museum recreates the atmosphere of the streets of Amsterdam during the German occupation of the WWII. Big photographs, old posters, objects, films and sounds from that horrible time, help to recreate the scene. The background of the Holocaust is visualized to the visitor. This is an exhibition about the everyday life during that time, but also about exceptional historical events, resistance of the population against the Nazis and heroism.

The building bearing the Star of David and the name of Petrus Plancius (1550-1622), the Renaissance Amsterdam clergyman and geographer, has been built in 1876 by the Jewish singing society Oefening Baart Kunst. It served for several decades as a Jewish cultural center and synagogue. The Oefening Baart Kunst society kept the Plancius name on its building to underline its respect to the Amsterdam city traditions. That was the name of the old house which stood on this spot before. For a long time Plancius building served in many different functions. Since 1999, after its renovation, it is the seat of the Verzetsmuseum. 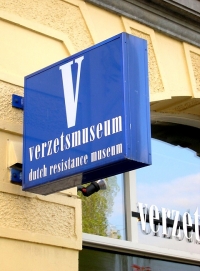 An interesting small museum about the German Occupation and the Nazi rule in the Netherlands during the World War II (1940-1945), just across the street from the main entry to Artis (Amsterdam ZOO), not far from the Waterlooplein and the Rembrandt House. Nothing from the gloom of the war museums. Restaurant and the café on the ground floor, visually interesting exhibit inside. If you want to know more about the WWII, the atmosphere during this dramatic time in the Netherlands and the persecution of Jews by the Nazis during this period – it is certainly worth seeing. Verzetsmuseum is a valuable addition to the Anne Frank Museum.

You can reserve your visit in advance on this Versetsmuseum tickets website.

Café / restaurant, Museum shop, Lecture hall, Library with the collection of books about the WWII

How to get to Versetsmuseum

Walking: from the Waterlooplein - ca. 10 minutes walk.
By tram: from the Amsterdam Central Station take tram 9, or from the Dam square take tram 14. Step out on a stop ‘Plantage Middenlaan/Kerklaan’ or stop ‘ZOO’.

Verzetsmuseum - Dutch Resistance Museum in Amsterdam on the map